Lao Leadership is a term that I created a few years ago.

“Lao” translates into “Senior” as a title in Chinese Mandarin. For example, “Mr Lee”, when given the respect of an elder, would be addressed as “Lao Lee”. Lao, or in this case Elder, can relate to the father figure, or elder brother. Lǎo bǎn (written as shown in the picture) is the name given to the Boss in China. In this instance, the words Lǎo bǎn is a relatively recent Cantonese addition to the language but its the concept of Elder, or Senior, or Lao Leadership style that I wish to discuss here.

I have always had a great interest in Chinese history. I am lucky enough to have a lovely Chinese wife, and we had the pleasure of spending a number of weeks in China where I fell in love with both the country and its people. 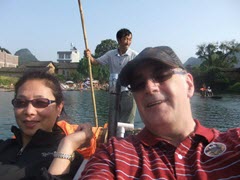 comes from centuries of the teachings of Confucius and family values.

Meeting my wife’s brothers in Qinhuangdao and then again in Beijing, was a very enjoyable few days and gave me a family insight to this thought of the Lao. Younger brother and I hit it off immediately and his easy-going casual style had laughter flowing as smoothly and abundantly as the beer even though we don’t speak the same language. Elder brother though showed great responsibility in

organising transport, accommodation and taking care of all the details of our visit. I felt a bond with both, but a respect for the elder brother for the responsibility, dignity, and presence that he showed; a hallmark of many years of being Lao to his family and his shouldering of that responsibility. In the case of my wife’s brothers, both were younger than me but elder brother was definitely my “Elder” and I gave respect to that.

There have been numerous articles explaining the respect offered to your elders in Asian cultures. What most articles fail to get across is not so much the respect that is shown to elders, but the immense mantle of responsibility that the elder takes on for those who are under their care.

is not so much the respect that is shown to elders, but the immense mantle of responsibility that the elder takes on

In other words, it’s not so much telling the young to “show respect to your elders”, but that the young respect the responsibility and care that they are being shown.

The responsibility of Lao or Elder is not taken lightly and means a great deal more than simply being in command. As an elder, or Lao, you would be responsible for the actions and the success or otherwise of those you care for. 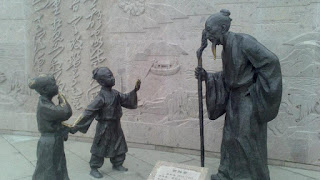 In Western countries, when you are employed by a company, you are expected to deliver for that company and if you fail to deliver to expectations, then you are looking for another job. You must show your boss that you are worthy of the position that he has placed you in and that you can perform well in that position to enhance the team, the project, and the company. In China, however, your Lǎo bǎn takes you in as family, like a younger brother or sister. It is the elder’s responsibility to ensure that you are able to deliver to the company. If you prove to be unable to perform to expectations, then the Lǎo bǎn will mentor you and do everything in their power to ensure that you do succeed. If despite their efforts, you prove simply not up to the task, instead of firing you, you may be reassigned to tasks more in fitting with your abilities and where your contribution can be better utilised. In this manner, it is the Lǎo bǎn who owes you the ability to succeed, not the other way around. By taking you on, the Lao is now responsible for you, just as they are responsible for a younger sibling.

the Lǎo bǎn owes you the ability to succeed, not the other way around

Compare that to Western companies and you can see the difference that the way of the Lao thinking can have. In a Western company, it is the employee who owes the company debt for the wages he\she is paid. All too often the employee is moved on without the time and responsibility that should be shown to mentor, train, and discipline the employee. In a strange way, the roles are somehow reversed in the Lao Leadership Style.

It is fair to say that the Lao style will not suit everyone and, like every leadership style, can also be open to abuse. It may only be where this Lao responsibility is ingrained into the culture of the people, will it work successfully. It will take a PhD study to determine the value of the style in today’s western culture where disrespect of power is as widespread as disrespect for responsibility in some circles. I don’t have any answers, but I’m certain that this is worthy of at least the question.

I have seen some of this leadership style in a few places but usually works more due to the actions of a single person and the mutually respectful culture that has been instilled in the company over many years, than to any specific implementation of a so-called “leadership style”.

Every style has its good and bad implementations, but I can’t help feeling that the Lao Leadership Style might have need of further thought and understanding.